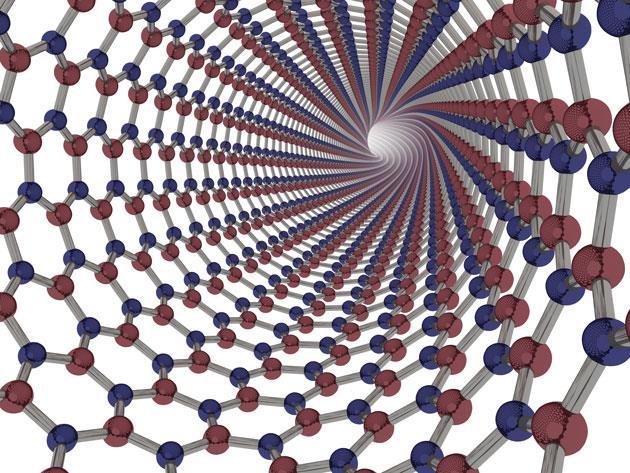 Researchers from Rice University claim that processing boron nitride nanotubes used to be challenging, but not anymore.

Professors Matteo Pasquali and Angel Martí, along with their team of researchers, have simplified the handling of the highly valuable nanotubes, making them more suited for use in large-scale applications including electronics, aerospace, and energy-efficient materials.

According to the study’s findings published in Nature Communications, boron nitride nanotubes, also known as BNNTs, can self-assemble into liquid crystals when exposed to certain circumstances, particularly concentrations of chlorosulfonic acid that are greater than 170 parts per million by weight.

Compared to the often-tangled nanotubes that develop in solution, these liquid crystals are made of aligned BNNTs, which are much simpler to handle. The liquid crystalline solutions were then used in the lab to create fibers and films.

Similar to carbon nanotubes, boron nitride nanotubes have hexagonal lattices made up of alternating boron and nitrogen atoms rather than carbon. Both types of nanotubes are robust, but BNNTs are superior electrical insulators and chemically and thermally stable in the air up to 900 °C (1,652 ℉), unlike electrically conductive carbon nanotubes.

The scientists had to make sure their nanotubes were clean to create liquid crystals. Sadly, the majority of the pollutants were boron nitride particles that posed a threat to clogging the system.

Ginestra added, “It is difficult to separate these boron nitride allotropes from BNNTs, and hard to even measure their concentration. All the different types of boron nitride appear identical by basically every quantitative technique that we have tried so far.”

They were able to produce superior batches of BNNTs by working with their supplier to refine their BNNT purification process for the creation of liquid crystalline solutions and by utilizing a purification technique created in the Pasquali lab, he added.

The Pasquali group was prepared to swiftly modify their wet-spinning methods for carbon nanotube fibers to manufacture the first boron nitride threads once adequate material was produced.

“There are reports of others taking solid puffs of BNNTs and stretching and twisting them to make a yarn, but that is very different from our process. Our goal was to make a very highly aligned fiber because the properties are better along the length of the nanotubes”, stated Ginestra.

He added that since the nanotubes within liquid crystals are already aligned, they make the best precursor for fibers. The liquid crystals’ birefringence, a phenomenon wherein crystals split light like prisms even though they appear to be transparent, allowed scientists to identify the BNNT alignment in them under the microscope.

The films also showed how BNNT solution processing can use techniques created for carbon nanotubes, according to Ginestra. Future electronics can benefit from the usage of such transparent thin sheets.

Ginestra further added, “The BNNT film and fiber properties will improve as the material and our understanding of the liquid crystalline solution improves.”