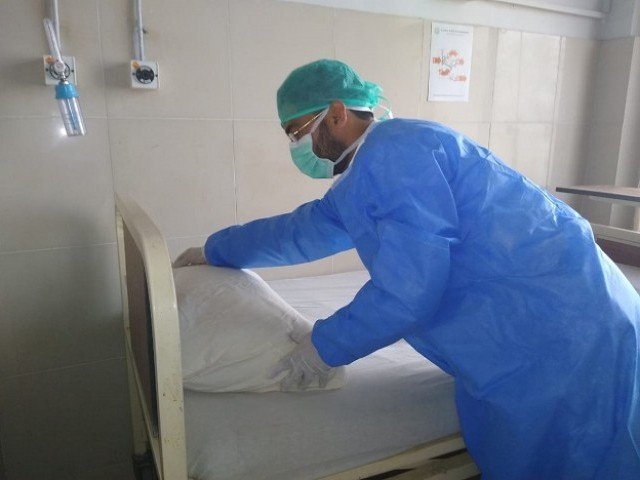 KARACHI: A day after Pakistan confirmed its first two coronavirus cases, isolation wards have been set up in different hospitals in the metropolis. Meanwhile over a dozen patients have been placed in quarantine at the Ojha campus of the Dow University of Health and Management Sciencies (DUHS).

Confirming that over a dozen patients had been admitted to the DUHS Ojha campus isolation wards, hospital spokesperson Naeem Tahir said that the majority of these patients had a recent travel history of visiting Iran. “All of them are in stable condition,” he added.

Meanwhile, JPMC executive director Dr Seemin Jamali said that the hospital was prepared for the situation. “We don’t have a single patient so far, but all preparations have been done in advance,” she maintained, adding that eight rooms, isolation wards and separate facilities for patients with minor symptoms had been established.

Speaking to Voice of Sindh, she further said that a rapid response team had been formed to cope with coronavirus. “Strict instructions have been given to all our staff members to remain alert and take precautionary measures,” she stated.

A six-member team of health department officials also reached the neighbourhood where the city’s first coronavirus patient, Y*, resided. The officials, led by district health officer Dr Ashfaq Ahmed, have been tasked with screening all the residents of the area.

“The team will only deal with those patients who have symptoms indicative of the virus,” explained Sindh health department spokesperson Atif Vighio.

He told Voice of Sindh that the health department wanted to provide screening facilities at the doorsteps of the area residents, who had been thrown into a panic by the news. “The doctors will work in the area until everyone with any symptoms has been cleared,” he stated.

Outside the metropolis, rumours of suspected cases circulated in different areas of the province as the Sindh government works to identify those who had made recent visits to Iran.

According to official figures, 98 persons from Dadu district had recently travelled to the neighbouring country.

A health department official from the district said that one individual had returned to Pakistan last week, while the others were still in Iran and would not be returning to Pakistan until further orders were given.

He added that the person who had come back had already been screened by a medical team and was in sound condition, without any symptoms.

In a meeting of senior government officials on Thursday, the decision was made to trace all the passengers who had travelled to Karachi on the same flight as Y. “Not all of the passengers were from Karachi,” an official told Voice of Sindh. “The majority of them are from different places in Sindh and some are even from Punjab.”

He said that government officials had been told to locate the passengers, screen them and place them under quarantine if they displayed symptoms of coronavirus.