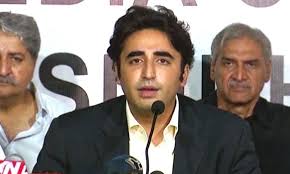 KARACHI: Chairman Pakistan Peoples Party Bilawal Bhutto Zardari has warned the PTI government to stop conspiring against the workers and laborers employed by state owned enterprises, adding that any lay-off of government, semi-government or state corporation employees would be vehemently resisted.

In his issued statement, the PPP Chairman said that Prime Minister Imran Khan and some of his cabinet members were involved in a plot to unleash a wave of unemployment and chaos and create a situation to sell off State Owned Enterprises for peanuts to their invisible partners.

He added that PIA and Pakistan Steel, two of Pakistan’s biggest assets, have been targeted by the PTI government from day one of its induction and that slowly it had set into motion its plan to deprive thousands of workers and millions of their family members of their livelihoods.

PPP Chairman said the federal government imposed the Essential Services (Maintenance) Act, 1952, on the Pakistan International Airlines (PIA) and banned the employees union, a blatantly unconstitutional move that lays bare their conspiracy to deprive the rights of the workers and unveils their nefarious plans for privatization.

He also pointed out that it was Imran Khan who had stood at the gates of Pakistan Steel Mill and promised that he had experts who would restore Pakistan Steel to its former glory and bring its operations to full capacity, but now he had gone back on his word and was advancing the agenda of those who planned to sell it to their friends and benefactors.

Bilawal Bhutto Zardari pointed out that PTI’s slogan to provide 10 million jobs was an eyewash to dupe the poor and unemployed and its government’s legacy would be one of the economic devastation of the poor.

The PPP Chairman said that his Party would not allow any lay-off, right-sizing or down-sizing in any sector and warned that PPP would resist these steps at any cost and lead the entire nation against the government’s abdication of its responsibilities to the workers of State Owned Enterprises as it continues to display heartlessness by firing people during a pandemic.

Let’s not play with the fire, DG ISPR warns India