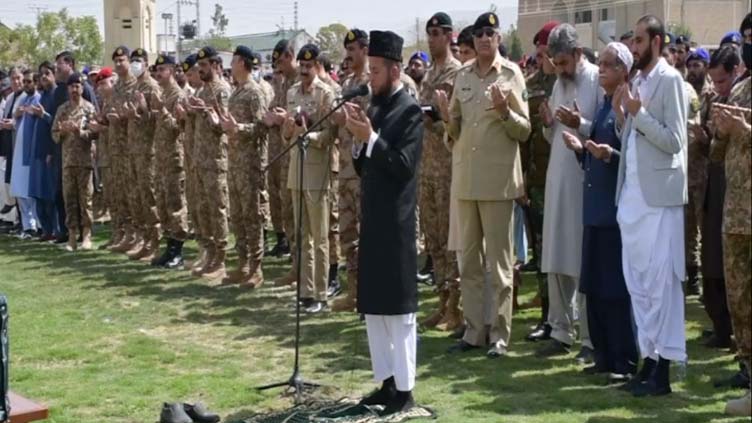 According to Inter-Services Public Relations (ISPR), General Bajwa met with the families of Lt Gen Sarfraz Ali and Brigadier Muhammad Khalid who were onboard the army aviation army helicopter that crashed during a flood relief operation in Lasbela district of Balochistan.

The army chief also met the family members of Lt Col Laiq Baig Mirza who was kidnapped and martyred by terrorists in Ziarat last month.

The funeral prayers of Lt General Sarfraz, Major General Amjad and Brigadier Khalid will also be offered in Rawalpindi after which they will be laid to rest.

The funeral prayers of other Pakistan Army soldiers martyred in a helicopter crash were offered in their native towns, and participated by the senior military officials, civilians and their relatives.

Major Talha was buried with full military honour as a Pakistan Army contingent presented guard of honour. Lt Gen Mirza presented the National Flag to his father and also laid a wreath on his grave.

The funeral prayer of Naik Mudassar Fayyaz was offered in Shakargarh, Narowal.

A Pakistan Army contingent presented guard of honour to the Shaheed, while the National Flag was presented to his family and a wreath were laid on his grave.

The Namaz-e-Janaza of Shaheed Major Saeed was held in Larkana. The Commander Logistics Pannu Aqil Garrison, serving senior officers, soldiers, relatives, and a large number of people attended the prayer.

The National Flag was also presented to his father.