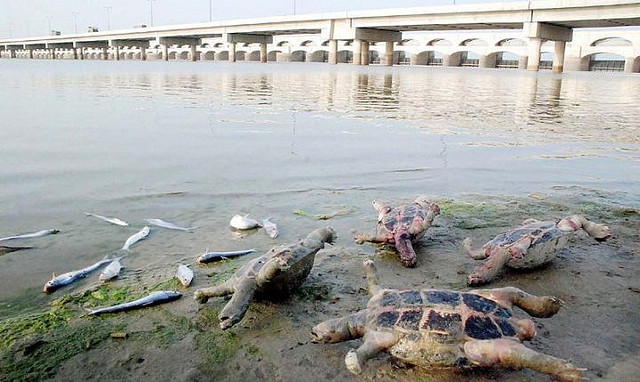 In Sindh, toxic water from scarp projects is dumped into the canals, which affects the sweet water and makes it saline and hazardous. The question is where do we put the drainage water? Wherever it is grown it will spoil the canals and other sources, we have no other option. The water of Kotri industry zone is also pumped into the canal and this toxic water spoils the fresh water of the KB feeder. On the other hand, the water from the drains of Hyderabad is pumped into the Phuleli canal, which causes the water to deteriorate the water of the Phuleli canal, and the people of in the lower areas Badin, Tando Haider etc are protesting. The instructions in this regard are given to purify the toxic water and pour it into the canals, but the implementation orders were being ignored by the industry owners because they don’t want to spend separate money for this work.

So what to do?

We have to learn from other areas. Ravi is a river in Lahore and it is called the dirtiest river in the world. It is one of the three rivers that went to India in the Sindh Basin Treaty.

Reasons of pollution in Ravi river

The reason for this called Active Pharmeciticel Ingredient (APS). Another reason for their increase is that a project is being made near Lahore called the Ravi river front urban development project. Which can be called an urban housing project on the sides of Ravi. Due to this project, the water pollution in the Ravi River will be increased as all the sewage water may be poured into the river. The above report is issued by New York University. The report states that the components of parastomal, nicotine, caffeine, epilepsy and diabetes were found from this water. Due to which the river Ravi has turned into a drain which contains health and industrial effluents. On the other hand, it is also said that the Hadiara outfall canal will also be extended into the Ravi.

It is also said that after the Sindh Basin Agreement, India pours all the dirty water into the Ravi. Due to which there is opposition to the plan to build a city there.

How can a city be built on any agricultural land? With this project, the level of the river near Lahore will also increase. On the other hand, it is also said that the than Prime Minister of Pakistan Imran Khan lauded that due to this project, 40 new factories will be built, people will get employment and money will come from abroad, which is 1.5 million so far while investment from foreign will also come into the country. For that project 1.5 million dollars from abroad had been funded.

However, we need to save the canals and rivers of Sindh at this time. We should not put polluted and dirty water in the Kali Baghar feeder and we should not put the saline water of the irrigation outfalls in the canals. A law has already been made for this, but there is a dire need to implement it. If this does not happen, the people below will continue to complain and nothing will be done.