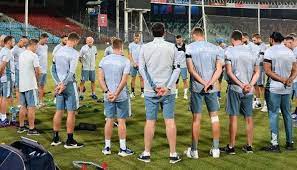 As Pakistan and England will kickstart their seven-match T20I series today, the England team will wear black armbands tonight in memory of the late Queen Elizabeth II.

England team’s representative said that players and officials will wear black bands in respect of their late queen.

On Monday, during their training session England team also wore black armbands to remember Her Majesty Queen Elizabeth II on the day of her funeral.

Meanwhile, the Pakistan team will wear a specially designed kit tonight to express solidarity with the flood victims.

Karachi will host four matches whereas Lahore will host the remaining three. This tour marked England’s return to Pakistan after 17 years.

The world must continue engagement with interim Afghan govt, FM

Four areas of Ukraine announced a referendum on joining Russia