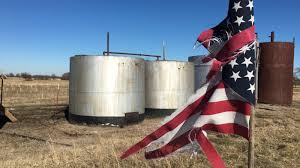 Even after passing 50 per cent of the decline on to consumers, the government could make up for revenue fall. This will also tone down prices of Qatari gas compared to domestic gas.

Monday’s price crash plummteted the US oil prices to range of $1-2 per barrel. Brent oil prices also hovered around $22-25 per barrel which is the lowest in 22 years.

The oversupply created by the price war between Saudi Arabia and Russia was compounded by the extremely low oil demand in most developed economies.

China, the second largest economy in the world, posted negative growth last quarter, first time in more than 35 years. Europe is also struggling hard to control the pandemic with economic activities at a halt.

Pakistan was already finding it hard to finance its huge oil bill as the crude oil was hovering in the range of $55-60 per barrel even before it was hit by the worst economic crisis before the coronavirus attack.

At the moment, the Brent Oil is still priced at $22 per barrel but if the buyers started buying from US this price would not hold. With the US oil prices declining to $2 (mx currently), the Brent price logically should not be more than $10 which means a price of $12 per barrel.

This low oil price has vindicated former PM Abbasi’s inking of an agreement with Qatar for buying Liquefied Natural Gas at 13 per cent of the Brent oil price.

Qatar is bound under agreement to provide this gas as Pakistan is bound to lift a certain quantity of cargo from Qatar whether we needed it in domestic market or not.

At current Brent oil rates, Pakistan will be buying LNG from Qatar at $2.6-2.8 per mmbt. At this rate it would be feasible for the state to procure gas from Qatar at a price even lower than our local gas.

Pakistan should exploit this opportunity as long as it is available. It could lower the gas tariff for all industries much below the price that the government is charging from exporting industries after paying huge subsidy.

At the same time, the cost of electricity from gas run power plants would also decline appreciably. The furnace oil rates would be lower than that of coal. It will be an opportunity to streamline our energy and power sector while this opportunity lasts.

The low oil prices would also give the government an opportunity to make up for huge revenue losses that it suffered before and after pandemic. It would definitely pass on some of the benefit of this lower price to the consumers that would be enough to satisfy them.

It could retain the balance by enhancing petroleum levy and pocket at least Rs800 billion from this levy which would be Rs400 billion higher than the earnings government earmarked from this item.

VIDEO GAMES ARE GOOD FOR US