Had no plan to appoint “favorite” Army Chief, Imran Khan 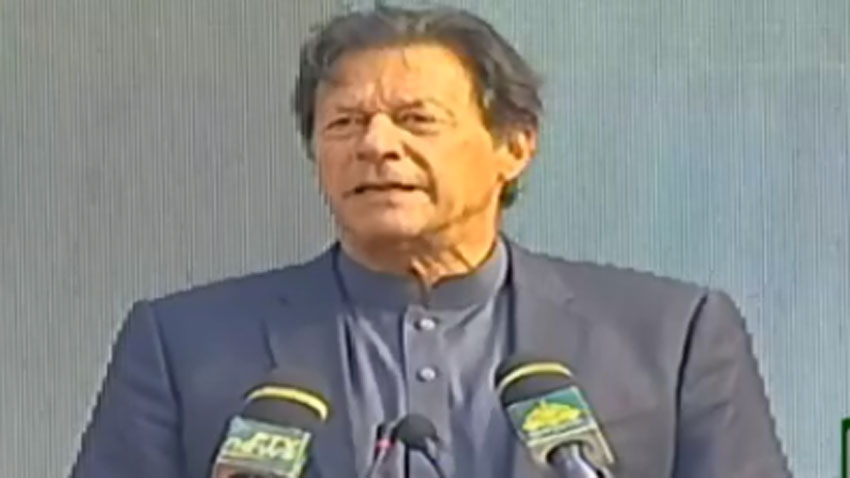 PML-N leader Khurram Dastagir recently said that he was about to pick his favorite general as Pakistan’s army chief in November 2022 and had 15-year plans for ruling country without interference, but he had no such plans.

“People like Nawaz Sharif try to pick favourites for such positions for they had to save their ill-gotten wealth, I have never even forced Shaukat Khanum Hospital to appoint a person on my orders, how can I do it as a prime minister,” said Imran Khan while addressing an event last night.

He was of the view that he is a strong believer in merit and feels that appointments against merit ruin institutions.

Deeply criticising the current coalition government, Imran Khan said that he predicted about their alliance soon after his entry into politics as he knew they all are corrupt and the day he will come to power, they (PML-N and PPP) will unite against him.

The former premier added that he has been blowing the whistle against these two parties for 26 years, people used to say that I don’t know politics. I knew from the beginning that the day I come in power these two corrupt parties would join forces, he added.

Talking about how why US carries out regime changes globally he said that the US does not want the betterment of that country but to safeguard their interests. Is it in our interest that we provide our military bases to the US? he questioned.

He added that we all know that we were exploited in America’s war against terror, our President was warned by the US that we will bomb you into the stone age if we do not comply, he added.

He added that sending the military to the tribal areas was a blunder, tribal areas were the area where the British suffered most life losses. Anyone who spoke against the actions was termed a terrorist, he added

He quoted an ex-army general that the US intentionally sabotaged our peace accord with the Taliban, “We are paying you to fight, not to have peace accords,” a senior American official said at Pakistan’s peace accord.

Did the US ever appreciate Pakistan for its cooperation in the war against terror? he questioned.  Me saying ‘Absolutely Not’ was in the interest of my people, he added.

I am not an anti-American, I want to have good relations with the US, but I cannot let them use us like ‘Tissue papers’. The U.S wants us to recognize Isreal and not talk about Kashmir so that India is strengthened, to curtail China’s power.

Imran Khan said that except for some years under the Bhutto rule, we have always been at service to the Americans. America gave a total aid of $20 billion us, while we lost over $150 billion in the war against terror, he added.

No nation can prosper by ‘polishing America shoes’, he added. Nations thrive on ideology and honour, Imran Khan said.

Pakistan is on a decisive turn, people will have to choose between a hard path of real independence or being ruled by these corrupt dacoits, he said.

The reason for not taking any action to stop the regime change is that ‘I could not even imagine that Shehbaz Sharif would be made the Prime Minister of Pakistan,’ he said sarcastically.

The ECP’s credibility has been lost, causing damage to the democratic process, he added.  All economic indicators were positive in our era, but the current government has destroyed it, he said.