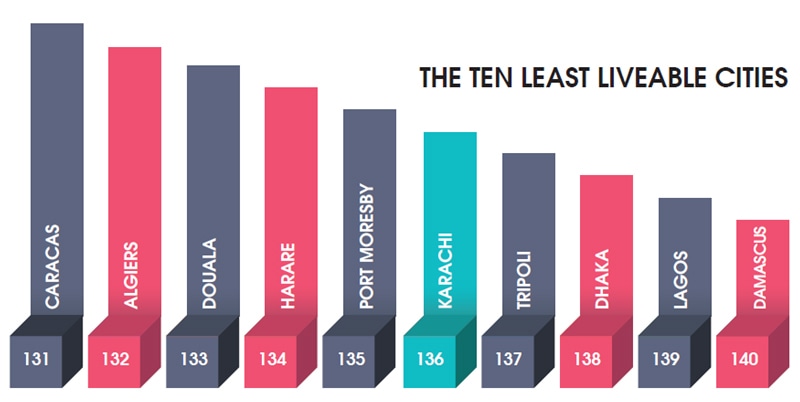 PARIS: Pakistan’s financial capital, Karachi, has been ranked among the world’s most unlivable cities, according to an annual index released by The Economist Intelligence Unit.

The unit’s global livability index for the year 2022 ranks Karachi 168th in terms of livability among a total of 172 countries.

Every city is assigned a rating for relative comfort for over 30 qualitative and quantitative factors across five broad categories: stability, healthcare, culture and environment, education and infrastructure. Scores are compiled and weighted to provide a score in the range 1-100, where 1 is considered intolerable and 100 is considered ideal.

Karachi has an overall score of 37.5, significantly lower than ideal. It has performed most poorly on the stability indicator, with a score of 20. The city has scored 33.3 on the healthcare indicator, 35.2 on culture and environment, 66.7 on education and 51.8 on infrastructure.

“Damascus (Syria) and Tripoli (Libya) continue to languish at the bottom of the list — along with Lagos (Nigeria) — as they face social unrest, terrorism and conflict,” the report said.

Most of the top-ranked cities on the index are from western Europe and Canada, with the Austrian capital Vienna topping the list. The city has a perfect score of 100 on four out of five indicators, namely stability, healthcare, education and infrastructure. On the one remaining indicator of culture and environment, the city has a score of 96.3. Its overall score is 99.1.

The Ukrainian capital of Kyiv was excluded from the list due to Russia’s invasion. The conflict influenced rankings for the Russian cities of Moscow and St Petersburg. Both recorded a fall in scores owing to increased instability, censorship, imposition of Western sanctions and corporates withdrawing their operations from the country.