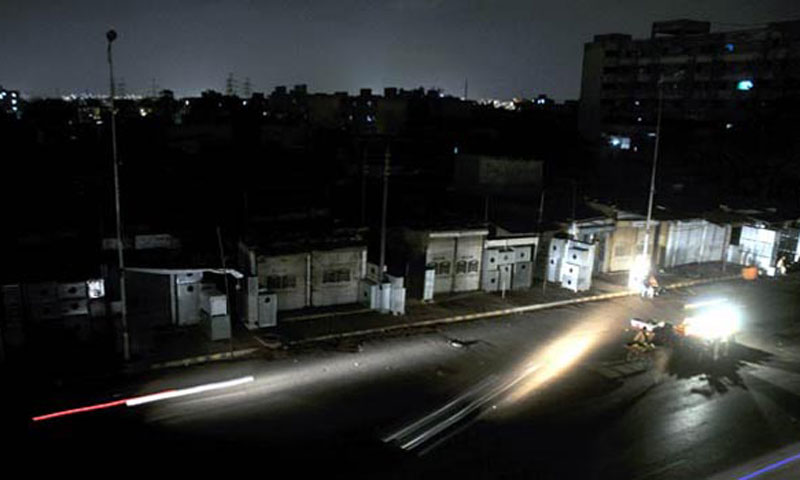 The National Electric Power Regulatory Authority (Nepra) on Wednesday took notice of persistent power outages as well as the alleged overbilling of consumers in Karachi.

The regulator directed K-Electric to submit a detailed report on the matter. K-Electric, in a statement, has blamed a shortage in supply of furnace oil and gas for the frequent power outages in Karachi

Consumers have been directed to register their complaints at Nepra’s regional office in Karachi. They may alternatively register them on Nepra’s website.

Unannounced frequent power cuts, which have been ongoing for some time in Karachi, have risen in intensity in the past week and making life miserable for Karachi residents, already enduring a trying summer with temperatures sometimes crossing 40 degrees Celsius.

Many citizens took to the roads today to protest against the prolonged outages.

Residents of Liaquatabad block the road as they hold a protest demonstration against prolonged electricity loadshedding in their area, at Teen Hatti Bridge, in Karachi on Wednesday, June 24, 2020. —PPI

Khawaja Burhan, who lives in Gulistan-e-Jauhar Block 18, said his area also experiences power outages daily between 3pm and 4pm and sometimes also unexpectedly later in the night, such as between 11pm and 12am.

“I had to get my PC repaired due to the repeated power cuts which caused it to malfunction. I suffered heavy work losses as a result, ultimately affecting my mental wellbeing,” said Burhan.

A resident of Gulshan-e-Iqbal Block 13 also had similar woes. He reported erratic power cuts in the past week, at least twice daily, sometimes between 11am and 12pm, sometimes between 3pm and 4pm and on other occasions between 4:30pm and 5:30pm.

Among other areas to witness unannounced power cuts were various other neighbourhoods of Korangi and Gulistan-e-Jauhar, Liaquatabad, North Karachi, Kharadar, F B Area, Khadda Market, Lyari, and Orangi Town.

“We experience almost two hours of load-shedding every day,” says a resident of C.P. Berar Society near Dhoraji Colony. “With no alternative source of power, such as a generator or a UPS, it becomes a hellish atmosphere to live in, with a lack of breeze and rising temperatures. It also exacerbates physical and mental health issues as well as the productivity of those working from home during the ongoing lockdown.”

Residents found it increasingly difficult to stay indoors even as a lockdown was enforced in many parts due to the coronavirus outbreak.

Some areas, such as Liaquatabad C1, reported power restoration after an 18-hour long outage, only to be disrupted against close to 11pm.

According to a KE spokesperson, the supply of fuel in line with the demand is the responsibility of “relevant institutions”.

Furthermore, according to the power distributor, loadshedding is taking place in areas where nonpayment of dues had been identified.

It is important to note that when a lockdown was imposed in Karachi towards the end of March, the city witnessed little to no power cuts till May 9. As soon as the lockdown was eased, power outages began to occur and have since grown in frequency and duration.

Lahore gets lock down till June 30 in seven areas

From rags to riches as fisherman bags Rs 8.6 million worth of catch

SSU arrests four alleged terrorists during a raid in Karachi