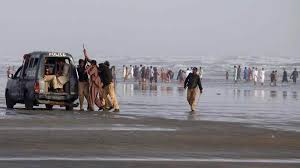 Darakhshan police pardoned a minor boy who stole a car from the metropolis’ Sea View area on Monday.

The police let the boy off with a warning and allowed him to go with his parents.

Earlier, the officers from the Darakhshan police station had taken the nine-year-old boy and taken him into custody.

Authorities said the child had stolen the car from Khayaban-e-Mujahid. Footage of the ‘robbery’ from a closed-circuit television (CCTV) had surfaced and shared publicly.

A resident of Machar Colony, the child likes driving and has in the past stolen motorcycles a few times, police said in this regard. The boy drives the vehicles until the fuel runs out whenceforth he then leaves them there, they added.

According to police, the little boy’s father is a drug addict. Police noted that they have warned the boy before letting him go.