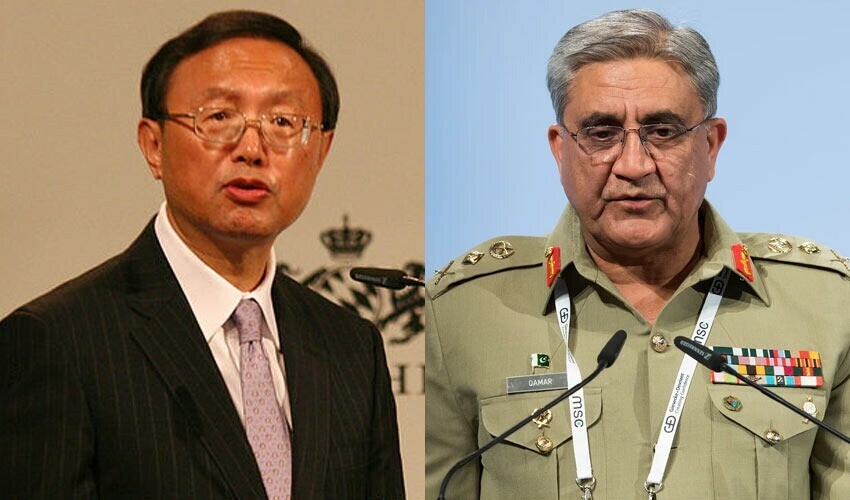 Pakistan and China have reaffirmed the commitment to enhance strategic partnership and cooperation, a press release by Inter-services Public Relations (ISPR) said.

The views were expressed during a meeting between Yang Jiechi, a high-ranking Chinese official and a serving member of the Politburo of the Chinese Communist Party, and COAS General Qamar Javed Bajwa at the GHQ.

The two leaders exchanged views on a number of issues including defence cooperation, CPEC and regional security. The COAS appreciated China’s role in regional and global affairs.

Jiechi expressed his gratitude for the security provided by the army to various Chinese nationals working and residing in Pakistan. He also reaffirmed to enhance diplomatic cooperation between the two countries.

The COAS reiterated that Pakistan is committed to work with global partners for peace and stability in the region.

Yang Jiechi, a member of the Politburo of the Central Committee of the Communist Party of China (CPC) and Director of the Central Commission on Foreign Affairs of the CPC arrived in Pakistan Wednesday on a two-day visit, a press release by the Foreign Office stated.

He is accompanied by vice ministers for Foreign Affairs and Commerce, vice chairman of China International Development Cooperation Agency (CIDCA), and deputy secretary general of the National Development and Reform Commission (NDRC).

“The visit is part of the regular high-level exchanges between Pakistan and China. Recently, these interactions included virtual meeting between the Foreign Ministers on May 11; Prime Minister’s telephone call with Premier Li on May 16; and Foreign Minister’s visit to China on May 21 and May 22,” the foreign office said.

The visit would further strengthen their “all-weather strategic cooperative partnership” and explore new avenues of bilateral cooperation, the statement added.