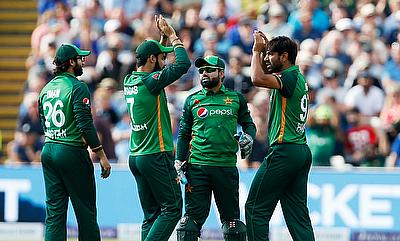 ROTTERDAM: Pakistan right-arm speedster Haris Rauf and left-arm spinner Mohammad Nawaz impressed with three wickets each as Pakistan bowled out the Netherlands for 186 in the second ODI of the three-match series.

The Netherlands, after opting to bat first, could not set a commendable target for Pakistan as the side bundled out for 186 in the 45th over despite the fifties from Bas de Leede and Tom Cooper.

Batting first, the home side were off to a dismal start as they lost three wickets for a mere eight runs in the third over.

Cooper and de Leede then anchored the proceedings for the hosts as they added a valiant 109 runs for the fourth wicket.

Right-handed batter Cooper, who enjoyed a second life after Naseem Shah overstepped while dismissing him caught and ball, went on to smash a brilliant half-century before Nawaz removed him in the 26th over for 66. He faced 74 balls and smashed nine boundaries and two sixes.

The hosts then again began to lose wickets at an alarming rate while de Leede held his ground firm and kept the scoreboard ticking single-handedly.

Besides de Leede and Cooper, only all-rounder Logan van Beek could amass the double figures as the rest of the batters failed to contribute significantly.

Right-handed batter de Leede top-scored for the side with a valiant knock of 89 runs off 120 deliveries, laced with two boundaries and three sixes before Haris removed him in the 45th over.

For Pakistan, Haris and Nawaz bagged three wickets each, while Naseem claimed two. Shadab Khan and Mohammad Wasim Jr, on the other hand, made one scalp each.

Court orders Shahbaz Gill to stay in hospital till Monday