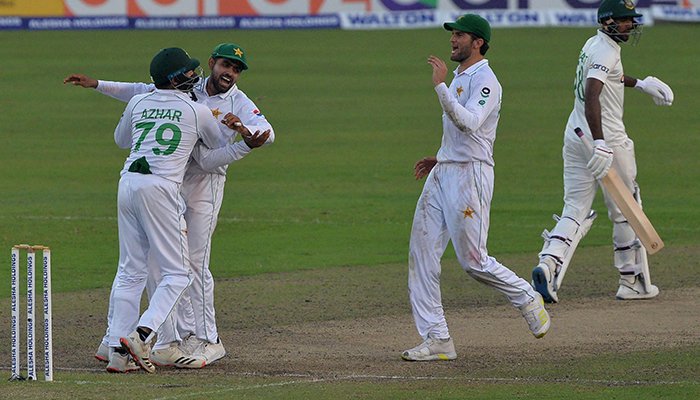 DHAKA: A sensational bowling performance from Pakistan saw them collect 13 Bangladesh wickets on the fifth and final day of the Dhaka Test to clean sweep the two-match series with an innings and eight runs win and bag 12 ICC World Test Championship points.

On what turned out to be a thrilling day for the lovers of Test cricket, Bangladesh, being forced to follow-on after managing a paltry 87 in reply to Pakistan’s strong 300 for four, battled to eke out a draw, but they failed one by one to answer the questions posed by the touring bowlers and were bowled out for 205.

In a befitting manner, Sajid Khan, who finished the match with 12 scalps after recording a career-best eight for 42 in the first innings, snared the last wicket as he trapped Taijul Islam LBW.

At the start of the day, Sajid, who had taken six wickets yesterday, added more to his tally, as Bangladesh could add only 11 more runs before they were bowled out.

After Babar Azam forced the follow-on, fiery opening spells from Hasan Ali and Shaheen Afridi reduced the hosts to 25 for four.

As a partnership between Liton Das and Mushfiqur Rahim started to build, the former handed a catch to Fawad Alam at square-leg off Sajid. The two paired for 73 runs.

Mushfiqur ensured that he held his end, but 49 runs later, he was run out attempting a quick single at the cusp of Tea. The right-hander made 48.

The onus of carrying Bangladesh home then shifted on their most successful all-rounder Shakib-al-Hasan. He chipped away runs and found boundaries at regular intervals in his 130-ball 63, which included nine fours.

As Shakib’s alliance with Mehdy Hasan, 14 of 70, started to instill hope in Bangladesh fans, Babar Azam picked up his maiden international wicket at the most crucial time.

The Pakistan captain introduced himself in the first half of the evening session and struck on Mehdy’s pads. After his appeal for the LBW was turned down, he successfully got the umpire’s decision overhauled after reviewing it.

Shakib departed next over as Sajid’s scintillating off-spinner from around the wicket knocked the left-hander’s off-stump.

From there on, it was only a matter of time. Sajid took the last two wickets as Pakistan secured the epic win.

Pakistan won the first Test in Chittagong by eight wickets.

They finished the tour unbeaten, having won the preceding three-match T20 series 3-0.