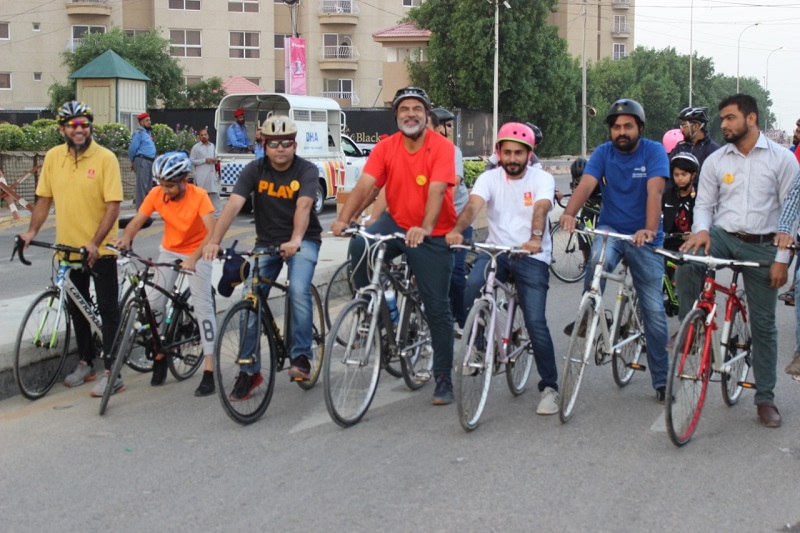 On breezy Karachi nights, Ali along with his fellow teammates from Crank Addicts train, while Ali himself had started cycling late and finished seventh in 2018 in the national circuit.

In just two years he emerged as a champion, thanks to training smartly, getting coaching from an England-based coach online and making sure that science is employed in the process of becoming an athlete, unlike the traditional ways that are applied among the athletes in Pakistan.

Just recently the Pakistan Cycling Federation have confirmed that Pakistan will be taking part in the UCI World Cycling Championship that will take place in September in Switzerland.

“If there is one discipline we are better than the rest of the countries even India is road racing and Pakistan has so much potential in it that we can make a huge mark internationally,” national cycling champion Ali Ilyas exclaims proudly, as he calls himself an experiment for the most part to be successful in cycling.

But Ali’s statement about how far Pakistan can go in road racing came in May, as the cycling at night had picked up as a trend during the lockdown in Karachi and many took up cycling as recreation.

The Sindh Cycling Association official Omer Khalid would say that the sales for cycles in Karachi had increased during the lock down as people were looking for some kind of activity.

However, the ramazan cycling was a thrill for many and the trend has stuck by as many cyclists are continuing night cycling in DHA, according to the SCA President Anjum Ayub.

The idea has been to make cycling an accessible sport, and the newly elected official and his administration will be working hard on making sure that the cyclists come first.

The night out for cycling looks different for the recreationalist and then for champions like Ali. His team employs structured training and have their equipment that can quantify their time during the sessions, while he tells that it is called “wattage” as to how much energy is put into every peddle and the temp that can be measured and controlled by the athletes if only one applies science and takes care of the regime, which has been unheard of previously.

Although according to Ayub and Khalid, cycling by no means is a cheap sport but SCA’s aim is to at least get sponsorships for 11 cyclists and train them for to be the best at the national circuit, whereas Lyari remains the hotspot for talent in Karachi.

Ali feels that the future of cycling for Pakistanis is in road racing, that is also an Olympic discipline.

“We can’t compete with India for example, where they are in badminton, in men’s women’s way ahead, even in hockey, but road cycling is still that one discipline that we are ahead, we still have the edge,” gushes Ali.