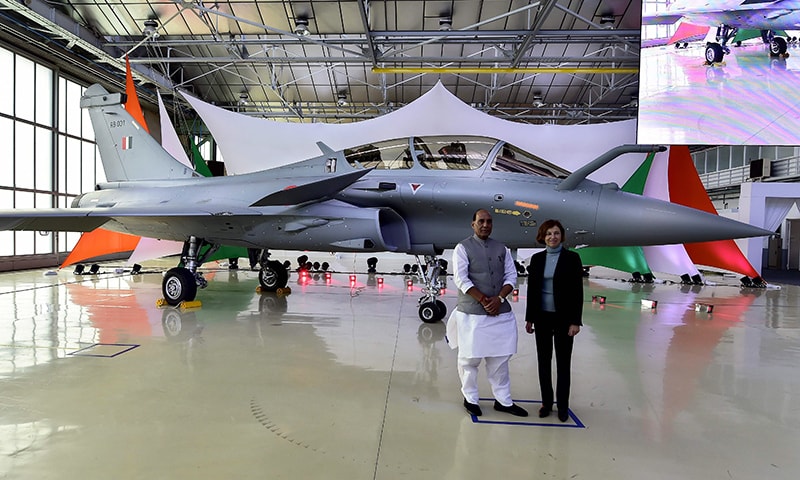 The Minister of Defence has written “OM” on the fighter jet, by Sindoor (Cinnber). Meanwhile, they welcomed the jet by pouring flowers and offered sweets. He also offered a coconut breaking ritual occurred for the measures of safety prayers in front of Jets.

After being done with the customs, he flown in that plane.

Ministry of Defence – Raj Nath Singh declared it in France: “I am content that “Rafal’s” deliverance has been on time, and I have high hopes that this will increase the power of our Air forces”

He further claimed: Today, France and India have started a political bond of a new era – I’d be honoured to fly in a fighter jet “Rafal”

Raj Nath Singh declared: “Rafal” is a French word, which means “thunderstorm” and I believe that like its name, it will be tightening the strength of Indian air forces’.

France’s company “Dasa” has made these fighter jets – and there were several queries questioned upon its purchase.

India’s word with France, regarding the fighter jets has been controversial – and India’s opposition is demanding that on the trade of French planes suspected on million dollars’ corruption, Narandra Modi should resign.

it’s pertinent to mention on 27th February 2019, Pakistan has received marvellous victory against India and captured their officer Abhinandan Varthaman after his aircraft was shot down in an aerial dog fight.

Later Pakistan held him free as an act of generosity to prevail peace and prosperity in the region, despite the misadventure.