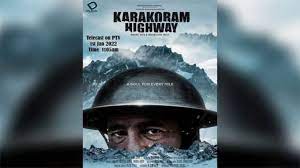 ISLAMABAD: Federal Minister Fawad Chaudary has shared the teaser for the documentary film “Karakoram Highway”. The documentary will be aired on state TV on January 1 (today).

On a social networking site Twitter while sharing the trailer for the documentary film based on Karakoram Highway the federal minister said, “It’s where the mountain and man meet and a story of determination of Pakistani nation.”

The federal minister said, “The documentary is a tribute to those who worked to make Karakoram a reality and declared CPEC an economic game changer.”

The documentary has been made in collaboration with Film Features Work Organization (FWO). The movie highlights sacrifices made during the construction of Karakoram Highway, which ought to be a huge project of 1300 km and it also referred to as the eighth miracle of the world.

According to a website Gwadar Pro, an hour long documentary sheds light on the importance of Karakoram Highway, which is a ground route that connects Pakistan and China. During the construction of the project nearly 692 Pakistanis and 108 Chinese have lost their lives.

TikTok becomes most downloaded app of 2021