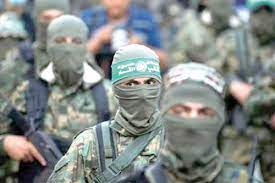 LONDON: Britain’s interior minister Priti Patel has said she had banned the Palestinian group Hamas in a move that brings the UK s stance on Gaza s rulers in line with the United States and the European Union.

“Hamas has significant terrorist capability, including access to extensive and sophisticated weaponry, as well as terrorist training facilities,” Patel alleged in a statement.

“That is why today I have acted to proscribe Hamas in its entirety.”

The organisation will be banned under the Terrorism Act and that anyone expressing support for Hamas, flying its flag or arranging meetings for the organisation would be in breach of the law, the interior ministry confirmed.