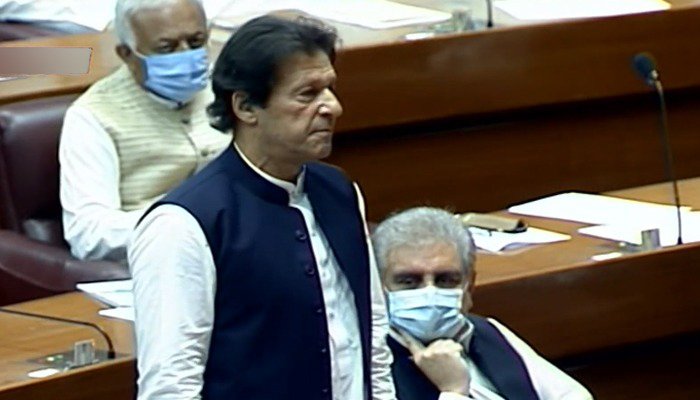 Prime Minister Imran Khan on Thursday defended his government’s coronavirus response, while addressing the National Assembly session in Islamabad, after it came under criticism from opposition for being “confused”.

He challenged the opposition to point out a single contradiction in his statements since Pakistan imposed the lockdown on March 13.

“We bore a lot of criticism in the beginning to impose a stricter lockdown. There was a lot of pressure on me. From my own people. From my own cabinet to impose something like India,” said the premier.

“It is being said again that there was confusion. Mr Speaker, if there was any government in the world that wasn’t confused it was ours. Since day one,” he added.

“I have always held that if you have Singapore’s population, an income of $50,000 per capita, if you have natural social distancing, then the best thing is to impose a curfew.

“I also said that our conditions are such, we have to think of the impact on the poor. These have been consistent statements on my behalf. You have all my speeches on record,” he said.

The premier paid special tribute to the National Command and Operations Centre as due to their efforts to establish proper coordination between provinces, Pakistan has data to act on.

“We had no figures previously for how many ventilators exist in Pakistan, how many intensive care beds there are, how much staff is available,” he said.

He said even in America, people can see that cases are constantly ballooning and they have had to accept they have to reopen their economies.

“They too are realising that even the world’s most powerful economy cannot endure the effects of a lockdown,” he said, continuing to defend his government’s decision to ease curbs.

“We were the first to talk of a smart lockdown. It was the NCOC,” he said.

He said the next phase is a difficult one, with the government challenged to impress upon people the importance of following standard operating procedures.

“We have to provide people a source of income but […] whenever there are clusters [of people], the disease spreads. We also know that if we do not exercise caution, the existing pressure on hospital will only worsen.”

“So whoever is watching, it is incumbent on all of us, to make people realise how important is is to save our elders, the ill, those who have blood pressure and diabetes. The real aim behind a smart lockdown is to protect these people,” he said.

The premier also stopped to extend his condolences to the families of the 4,000 people to have died from COVID-19.

US Government to host webinar on ‘Building Advocacy & Communication Partnerships…

US Government to host webinar on ‘Building Advocacy &…