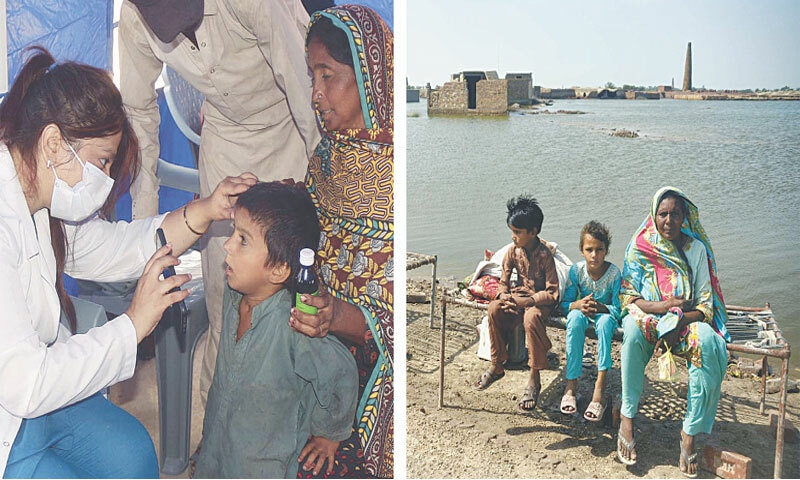 The floods that have submerged large parts of Pakistan in recent weeks have killed around 1,500 people and left tens of millions homeless, but the final death toll is likely to be significantly higher. From disease to healthcare disruption, flooding events affect people’s health through various direct and indirect ways. Such events are also expected to become more frequent as a result of climate change and rising sea levels. So what makes floodwater so deadly, and is there anything countries can do to reduce the toll?

Flooding can cause widespread damage to crops and livestock, affecting both the quantity and quality of food available.

Flooding accounts for 40% of all natural disasters worldwide and is responsible for about half of associated deaths. Most of these deaths are from drowning – particularly as a result of people getting trapped in their vehicles as they try to drive through the torrents. Deaths can also occur if people get knocked over by fast-moving water, as a result of over-exertion, hypothermia or electrocution, or as a result of being hit by objects similarly caught up in the floodwater, including falling trees. Some of these injuries may not kill immediately, but in the days or weeks after the event, such as through wounds becoming infected by bacteria in the floodwater.

Carbon monoxide poisoning is also surprisingly common, as people use pumps, generators, and pressure washers to clear or dry out buildings without adequate ventilation.

Access to clean water is often a major problem in the aftermath of severe flooding. Floods can cause sewers to overflow, contaminating drinking water and increasing the risk of gastrointestinal disease, while poor hygiene and overcrowded shelters can exacerbate the situation.

Recent floods in Bangladesh resulted in large outbreaks of bacterial gastroenteritis, particularly cholera and pathogenic E. coli – with cholera outbreaks tending to strike roughly eight days after the initial flooding event. Rapid distribution of oral cholera vaccine can help to mitigate this risk, although delivering it to flood-affected communities is challenging.

Other diseases associated with flooding events include typhoid fever, hepatitis A and E, rotavirus and norovirus. Being immersed in, or inhaling, floodwater can also result in lower respiratory tract infections such as pneumonia, as well as skin or eye diseases, or leptospirosis (Weil’s disease), which spreads through contact with rodent urine.

As floodwaters recede, pools of stagnant water can become breeding grounds for mosquitoes, increasing the risk of mosquito-borne diseases such as dengue fever and malaria. Already, there has been an increase in dengue cases in Pakistan, with at least 3,830 cases and 9 deaths reported by health officials in Sindh province as of 15 September 2022. Health officials have also reported an increase in malaria, diarrhoea and skin disease following the flooding.

It’s not only humans that are made homeless by floods. Wild animals, including snakes and spiders, may seek refuge inside houses, storage sheds and other buildings, particularly if these have been damaged. Rapid treatment with antivenin is necessary for those bitten by poisonous snakes, yet flooding can also hinder access to treatment.

As of 30 August, 134 people in Pakistan were reported to have suffered snakebites as a result of the floods, including a woman in the north-western Khyber Pakhtunkhwa province who died after failing to access prompt medical care. As well as deaths, bites from venomous snake and spider bites can cause lasting disabilities.

When Cyclone Ana hit Malawi in late January 2022, it triggered widespread flooding in some areas. This resulted in extensive damage to health infrastructure, including clinics, health records, cold chain equipment, medicines and medical supplies.  Many individuals also lost regular medications in the floods.

One consequence of such disruption is a deterioration in the health of people with chronic illnesses such as diabetes or cardiovascular disease, with an associated increase in death. For instance, following flood events in Florida during the 2004 hurricane season, there was an increase in heart attacks, and doctors reported a deterioration in patients’ blood pressure control.

Flooding can also hamper the delivery of vaccines, particularly in rural areas where people must travel to access clinics.

Flooding can cause widespread damage to crops and livestock, affecting both the quantity and quality of food available. For instance, in parts of South Sudan, flooding over the past three years has means many people have been unable to cultivate their land. Some have also lost livestock to diseases caused by the animals grazing on flooded fields and many have resorted to foraging for wild foods such as water lilies. Undernutrition or malnutrition remain major threats to health.

Although it may not be as deadly, the emotional impact of losing one’s home, belongings or livelihood lingers long after the floodwaters recede. There’s also the economic stress associated with rebuilding, which adds to this psychological toll. Mental health problems in the aftermath of floods are often overlooked and are not as well studied as the immediate health impacts of flooding.

According to research conducted in the UK in the aftermath of widespread flooding during the winter of 2013/14, the prevalence of depression, anxiety and post-traumatic stress disorder (PTSD) remained elevated for at least two years after exposure to flooding. “Our research suggests that support to deal with the extended damage to homes, sanitation and utilities caused by flooding might be needed to reduce mental health risks,” the authors wrote.

CM Sindh, WHO works together to prevent water-borne diseases