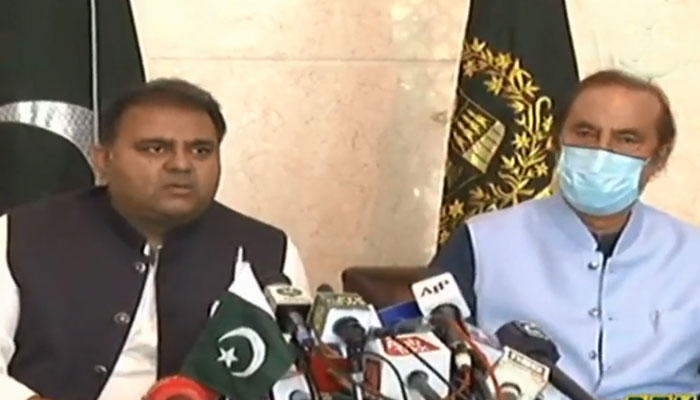 Addressing a press conference in Islamabad, Fawad Chaudhry said that after the elections, there is a quarrel that we do not accept the result. The Prime Minister had formed a parliamentary committee on the first day on the allegation of rigging. , We did not ask for details, we asked for details of Form 45 but no details were given.

He said that PML-N is telling PPP that rigging has taken place. In the Senate election, we talked about open vote. PPP and PML-N have talked about opening vote in Senate. He tried for an open ballot but the opposition backed down. The manner in which Yousuf Raza Gilani became a senator is in front of everyone.

Pakistan Tehreek-e-Insaf (PTI) leader and senior lawyer Babar Awan said on the occasion that the country is not made up of land and buildings but of institutions and people, a storm of political rigging erupted in the 2013 elections, a judge told returning officers in 2013. He said that if 4 constituencies were not opened then the biggest sit-in in the history of the country took place and all parties termed the 2013 elections as RO elections.

Referring to election reforms, Babar Awan said that the lack of electoral reforms had created a crisis of confidence in the constitutional institutions, so the Prime Minister has decided to bring electoral reforms. is going.

Babar Awan said that section 103 is being amended for the use of electronic voting, we will show the media the voting system which has been developed by national and international institutions, electronic voting will remove the allegations in the electoral process.

He said that constituencies would be formed on the basis of registered votes instead of population, delimitation would be done according to NADRA data. There is nothing in the interest of any one party.

Babar Awan said that all the political parties have talked about election rigging, the opposition parties have not presented any evidence in any tribunal so far.

The PTI leader said that the Prime Minister had said that the agenda of electoral reform should be shown to the civil society, press clubs, bar councils and the reform agenda would also be taken before the APNS and CPNE.

COVID-19: Certificates being issued for both single and double dose vaccines, says NADRA

PoL prices jacked up by government