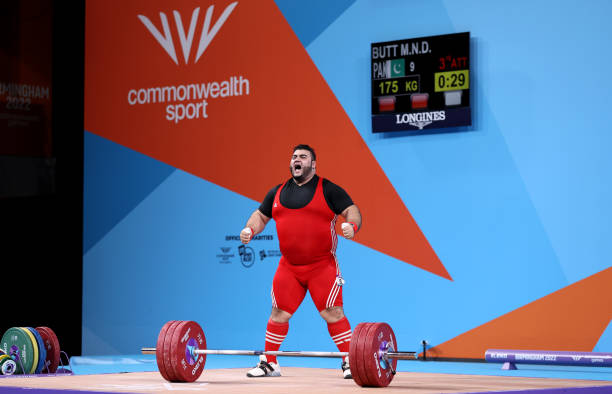 BIRMINGHAM: Weightlifter Nooh Dastagir Butt has won the gold medal for Pakistan in the Commonwealth Games 2022 with a record lift of 405kg.

Nooh Dastagir Butt has set a new Commonwealth Games record by lifting 173kg in snatch in the 109+kg category. Butt also set another record by lifting 232kg in clean and jerk. Overall, he lifted 405kg – another CWG record.

Earlier, In the 2018 Commonwealth Games, Butt had got a bronze medal in the 105+kg category. In the same games, Talha Talib also bagged bronze in the 62kg category.

In 2006, Shujauddin Malik won the only gold for Pakistan in the 85kg category in CWG’s weightlifting event.