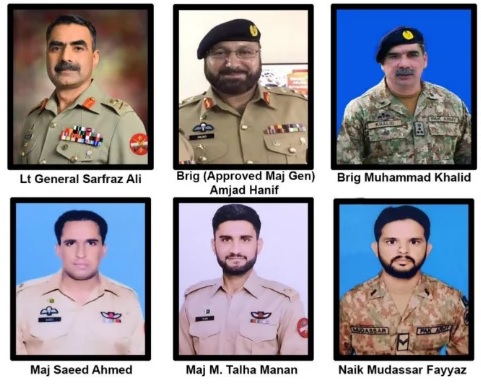 The military chopper had gone missing as it was en route from Quetta to Karachi at around 5:30pm. The personnel in the chopper were overseeing the flood relief efforts in the southwest of the country.

Above normal monsoon rains and deadly flooding have hit Pakistan hard this year, killing hundreds of people so far and wreaking havoc, particularly in Balochistan.

The army has remained involved in rescue and relief efforts there.

The ISPR, in a statement, said that the wreckage of the unfortunate helicopter was found in Musa Goth, Windar, Lasbela. It said that the accident occurred due to “bad weather” as per the initial investigation.

Lieutenant General Sarfaraz Ali, who was commandant at the Command & Staff College in Quetta, had been commissioned in six Azad Kashmir regiments in March 1989 and served the Pakistan Army for 33 years. The Director-General Pakistan Coast Guard Major General Amjad Hanif had been commissioned in 19 Azad Kashmir regiments in April 1994 and served for 29 years in the Pakistan Army.

Commander Engineers 12 Corps Brigadier Muhammad Khalid had been commissioned in the 20 Engineer Battalion in 1994 and served for 29 years in the Pakistan Army. Major Saeed Ahmed was the pilot while Major Muhammad Talha Manan was the co-pilot. Naik Mudassir Fayyaz, the chief of the crew, was also on board and embraced martyrdom.

The officers were part of the relief operations in Balochistan as the monsoon flooding, which began in mid-June, killed almost 500 people so far in Pakistan, including 149 in the province alone.